Anba Maximos was a servant and a witness, with both his knowledge and simplicity at once. He was a scholar of the Coptic language and a prominent leader of the Monks School in Helwan. He was also a candidate for papacy after the departure of Pope Youssab II, and during the selection process he received the highest number of votes. In all of this, he was always a poor monk and ascetic who exhibited obedience like that of children. He was a true cross-bearer who fought against the joys and luxuries of the prince of this world.

He was an angel sent by the Lord to lead and guide His people, to consecrate His churches, and to ordain His priests. He did not rely on his own arms, nor on the counsel of men, but rather on the divine grace that was in him. He was truly revered and loved by all those who got to know him.

Anba Maximos was known for his humility and meekness. He was an example of the righteous priest, the good and charitable bishop, and the poor-in-the-spirit metropolitan. Christ blessed him and made his face shine with the grace of joy to be an icon and example in our generation. He won many souls and multiplied all the talents that were given him, when he was the deputy of the monastery of St. Mary, Al Moharaq (1952), when he was chosen to be the Custodian of the Library of the Patriarchate in Cairo, when Pope Youssab II, the 115th Pope of Alexandria, chose him to be his spiritual secretary, and when he was the first Coptic Orthodox priest in Kuwait. He always lifted up his heart to heaven, and when the time of his departure from this world was approaching he kept saying; “I’m going to the cell above’, referring to the kingdom of heaven.

Like all the great saints, Anba Maximos was known for his wise ability to withdraw from situations when that was the best course of action. During his time there was a crisis between the State and the Church. President Sadat appointed a committee to, supposedly, lead the Church instead of the Pope, the late thrice-blessed Pope Shenouda III. Anba Maximos was appointed to this committee but he refused to attend any of its meetings. He escaped from this trap and said; “it is called the See of St. Mark, not the pew of St. Mark!”. This is the wisdom of the saints and their loyalty to the Tradition of the Church. He did not cry out, nor did anyone hear his voice in the streets (Mt 12:19). He was a symbol of unity and perfection.

Anba Maximos had a special relationship with Pope Kyrillos VI that started when Pope Kyrillos was still a monk living in solitude – called Abouna Mina at the time – for they were truly alike. He supported Pope Kyrillos in restoring monastic life to St. Mina’s Monastery. He was also a great support to Abba Mina, the Abbot of St. Mina’s Monastery, who found in Anba Maximos a brother, a father, a supporter, and a guide to the first seven monks in the wilderness of Marriott. His name became associated with this victorious group of cross-bearers.

He was also known as the bishop of ordinations, the bishop of consecrations, and the scholar of the Coptic language. He was also a great supporter to late Pope Shenouda III whom he loved dearly. Pope Shenouda likewise loved him and held him in a very high regard. Indeed, he elevated him to the rank of Metropolitan because he was truly a unique ecclesiastical figure, with unfading wisdom, generous to everyone, and uniting all in the One.

He was clothed with the heavenly light, asking always for the intercession of Archangel Michael. He was a friend of the saints from his early years in the city of Akhmim in Upper Egypt, until he became a luminary of the Al Moharaq Monastery, and a star of Atreeb, wearing the priestly garments of Aaron, standing before the altar, offering spiritual sacrifices acceptable to God.

The Heavenly Father granted him transparency to restore to our mind the image of the forefathers. His spirituality was mysteriously and wonderfully felt by all those who sought his blessing. They would find him quiet and looking at them with the look of a heavenly father, without judging anyone. He became a phenomenon to be followed and imitated. He lived in the company of the anchorites in Atreeb and in constant praise. All those who met him were blessed by their encounters with him and saw how he was above any material possession or lust or ego, living his monastic vows in accordance with the canon of the early monastic fathers.

While he was the servant of the See of Al Qalyoubia, we knew him in Alexandria as “the bishop of priests’ ordinations and Churches’ consecrations”, for Pope Kyrillos always delegated these priestly duties to him. Even prior to that time, when he was still Hugemen Angaelos Al Moharaqi, he served for a while as the priest of the Church of Archangel Michael (in the district of Ghorbal, Alexandria) when it was first founded. He consistently attended the ordinations of monks and commemorations of saints in the Monastery of St. Mina in Marriott. He was always humble and joyful, hurrying to please Him Whom he served as a faithful soldier in His army.

He achieved so much, yet he always fled from all glory. He was like an open book, radiating with the love and company of the Holy One. He always sat amidst his children, reading the Gospel with them and reciting the book of Psalmody which he knew and memorised by heart. He taught the Coptic language in all his gatherings as if they were the Coptic schools of old.

Truly, whoever saw Anba Maximos saw an Eskeem-wearing, cross-bearing metropolitan, who was the epitome of sacrifice and apostolic worship. He praised with the Psalmody with which he drew near to the throne of mercy to stand before God in the company of his beloved saints of the Church. Anba Maximos is undoubtedly one of the most famous metropolitans of the Coptic Orthodox Church worldwide in the twentieth century.

May the Lord repose his pure soul, and may we benefit from his example and his life that is full of God’s grace. 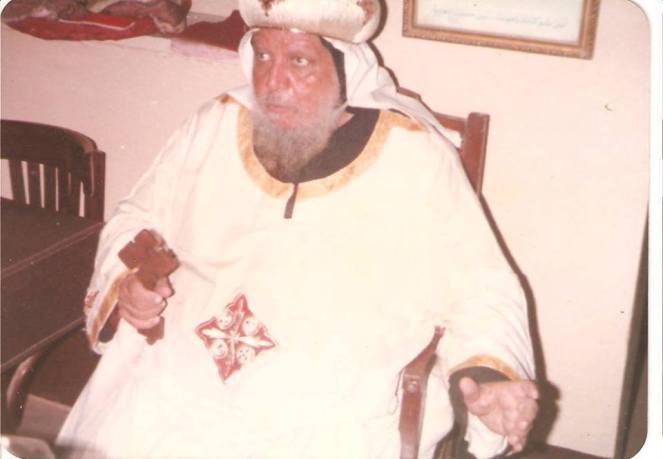