Hanaa Yousry was a Christian girl born on 14 October 1988 in Ismailia. She was known to be a very kind hearted, simple and spiritual girl. She didn’t know what hate was and was loved by everyone around her. When she was still at university, she got married to Niagdy Nagy from Alexandria on 4 Februay 2007. She only had one son, Youssef. She was careful to raise him in the fear of God and in the Church which she believed as her mother.

Her friends recounted that Anba Karas appeared to Hanaa three times a few days before the incident.

On New Year’s Eve of 2011, Ilanaa’s family went to the Saints Church in Alexandria. A relative who didn’t attend Church that night said: “as the clock struck midnight, tears streamed down my face without knowing the reason”.

After hearing about the bombing in the Church of El Kedeseen, her relatives kept on trying to get in touch with Hanaa but there was no answer until her uncle, the monk, called her brother and told him that he had seen her glowing in heaven.

It was discovered later that her husband was badly injured and was taken to hospital. Her son was miraculously fine, while she was martyred. That same year Hanaa appeared to  number of family members and friends. 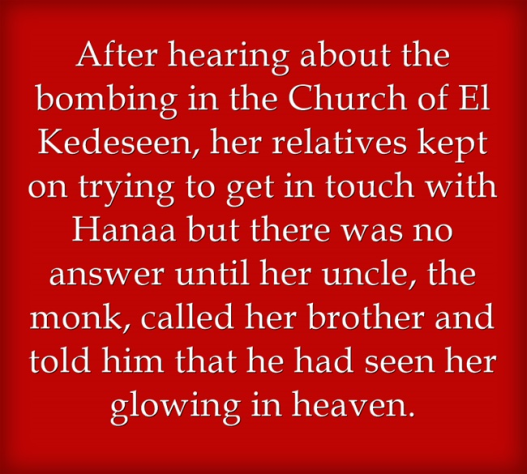