Being a teenager is never easy. Temptations are all around you, wanting to be part of every popular group and every new fad; not to mention being a Christian teenager in Egypt and all its “added bonuses”!

At the age of sixteen, Morcos was faced with a critical decision, that would change the rest of his life. Morcos, was brought up in a Christian family that loved God and the Church, as most of Copts in Egypt do. He was very keen to follow the commandments of the Lord.

In the early 1990s, Morcos was abducted by a group of Muslim terrorists and taken to a deserted area in the mountains in Upper Egypt. They tried to force him to deny his Lord and convert to Islam. However, Morcos refused and merely repeated the simple, yet powerful line: “I am a Christian”.

They severely tortured him  and wrote on his leg with acid the Islamic ‘Shahada or Confession’ – “There is no  God but Allah and Mohammed is the prophet of Allah”.  Nevertheless, Morcos kept repeating: “I am a Christian.”  He would not change his words or position.

After many days, when they realised they could not  coerce him to conversion, they took him and left him for dead on the side of the desert highway. In spite of their efforts, the Lord’s will prevailed and a passing car rescued him.

Morcos survived his ordeal and continues to live his days as a confessor amongst many other youth, who face similar forms of persecution on a daily basis.

Jesus says: “Therefore whoever confesses Me before men, him I will also confess before My Father who is in heaven.” (Matthew 10:32). Morcos’ confession of Christ and his refusal to deny Him will not be forgotten in Heaven. 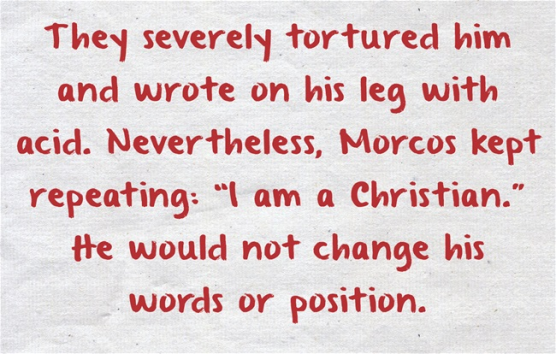