*Warning: this story contains graphic descriptions and may be very disturbing.

Mary, a twenty-five year old, was a beautiful, peaceful and serene girl, who lived to serve others. She used to visit the sick in hospital and nursing homes and gave comfort to all around her. She extended a helping hand to anyone in need. This virtuous girl’s life was cut short, like a beautiful flower that deserved to be put in a heavenly vase.

Mary worked in Electronics Company. Like any other day, on a gloomy Friday, she left home and headed to work. After work, as usual, she went along with her daily services to help those who were in need.

As many other Fridays, lately in Cairo, the streets were congested with uncivilised activists and Muslim fanatics, who fired on anyone and anything. Bullets and bombs sounded here and there by armed forces, trying to protect civilians.

However people have to manage their business and needs in life as much as they can amid this chaotic situation. But for Mary it was not her business but the business of God that she had to manage that Friday afternoon. In spite of the danger, Mary drove her small sedan with the aim of visiting an old woman whom she used to serve and who was confined to bed, to give her food and medicine.

One can imagine the fear that Mary went through! She prayed and begged them to stop, but with no avail. They ordered her to take off the cross necklace and the cross in front of the car mirrors. As someone who loved the lord very much and served Jesus most of her life she kept praying but her hearts and hands did not allow her to remove the cross of Jesus. Those heartless people climbed on the roof and kept banging furiously until they forced the car door open. They maliciously and brutally pulled Mary out and started hitting and knifing her amidst her begging for pity and mercy. However, those callous so-called people, who were worse than animals, had no mercy or pity but they tortured and tormented her with knives and sticks, until she bled to death. Not satisfied with that, they stripped her out of her clothes and dragged her along the streets. They then burned her car to ashes!

Those cruel and evil people killed Mary, the virtuous and righteous, and broke the hearts of many Christians around the world. Her family, mum, dad and a sister appeared some days later on TV to comfort all the people who were very sad about this incidence. The appeared full of peace and in prayers they asked the Lord not for revenge but to open the eyes of those youth to see the Light and the Truth.

May God repose Mary’s soul in heaven and to keep praying for us to be strong in faith as she was. 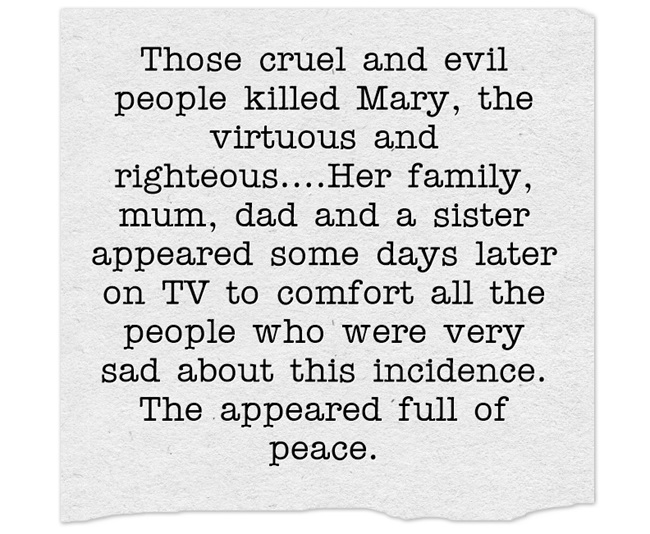