Muslims consider converts from Islam to Christianity to be apostates and hence, deserving of death.

So what happens to converts who become joyful and want to shout to the whole world to come to Christ? Let us witness what actually happened to one such brave convert!

It all started after Father Bishoy El Raheb (not the real name) baptised a Muslim in his late 20s in Egypt. The man was a prominent “Sheikh” (teacher in Al Azhar University) – one of the most renowned Islamic universities in Egypt and the entire Arab world.

After his baptism, the man was so happy, that he began shouting and boasting in a loud voice, “I am a Christian!” Father Bishoy tried to persuade him to keep quiet, so he would not get in trouble with the Egyptian authorities. Knowing well the dangers involved in his confession, the man kept repeating the verse: “Therefore whoever confesses Me before men, him I will also confess before My Father who is in heaven.

He told Father Bishoy, “I will never deny my Christ. I will tell everyone that I have become a Christian, even if they cut me to pieces.

Father Bishoy tried to convince him to preach quietly, like alt other converts living in Egypt. but he simply refused. Therefore. Father Bishoy with his good sense of humour told him “OK. we’ll meet in heaven then, because you will not live for long.” The man told him: “That’s fine; I will see you in heaven.’

Four days later. Father Bishoy saw the youth’s photo in the newspapers; he was shot dead in the middle of Tahrir Square in broad daylight. The case was closed as a revenge killing and no one was charged.

What appeared to be a brutal attack on ones faith was seen by the victim as an entry ticket to a resting place he was both ready for and yearned for. 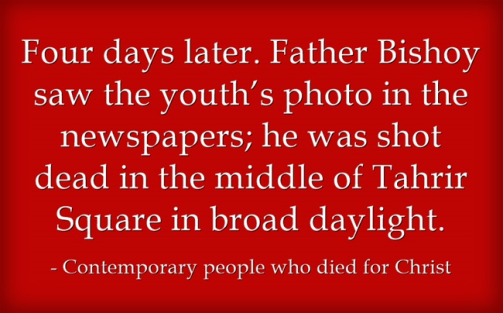